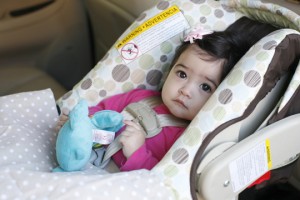 All car seats are required to pass a standard test based on the Federal Motor Vehicle Safety Standards (FMVSS) with the results presented in a pass/fail format. Last week, new testing data was released by Consumer Reports on the safest infant car seats available on the market.  The testing data used for the report was generated from independent testing designed to see how much each car seat exceeded the FMVSS test “pass” mark. In the report, each car seat is given a rating of “best,” “better,” or “basic.” In today’s blog, we break down the differences between the FMVSS and Consumer Reports testing to help you determine the safest infant car seat for your family.

Federal Motor Vehicle Safety Standards Testing
The FMVSS testing began in 1967 with the establishment of standards for seat belt assemblies. Standards for car seats and other child safety restraints were established in 1971 and amended in 1981 with the purpose to “reduce the number of children killed or injured in motor vehicle crashes and in aircraft.” The test uses an older style back seat with the lap belt only installation of the car seat which allows the car seat to be approved for older and newer model cars.

It is important to note that the test sleds used for FMVSS tests do not have a floor, so it is not possible to test car seats with the load leg installed. There is also no blocker plate to simulate the front seat in the vehicle which is of particular interest if the front seat of your car will be less than an inch away from the car seat when installed. The sled is accelerated to simulate an impact at 30 MPH, and the seat is assigned a pass or fail grade. Overall, the FMVSS test is adequate for determining the safety of car seats and, if they had graded rating scale, would be okay for determining the safest infant car seat.

Consumer Reports Safety Test
The safety tests performed by Consumer Reports were done a bit differently from the FMVSS testing, and it is important for you to understand these differences when interpreting the results. The Consumer Reports tests used a more modernized version of a testing sled that was equipped with a floor for testing load legs and a blocker plate to simulate the front seat. It should be noted that these test sleds include a more modern back seat with lap and shoulder belts. This means that while these tests are valid for modern vehicles, they may not apply to car seats installed in older vehicles or those with lap-only seat belts. In this series of tests, the sleds were accelerated to simulate an impact at 35 MPH. The ratings were designed to easily help you distinguish the safest infant car seat and were based on crash test rating, fit to vehicle, and ease of use to help ensure proper use.

Outcome
We were very happy to see that some of our favorites were rated in the “Best” category meaning they are some of the safest infant car seats you can buy. However, before sharing the outcomes of the new Consumer Reports testing, we thought it was necessary to point out that both FMVSS and Consumer Reports testing was also performed using the LATCH system. This is important because regardless of which test data you use for decision making, you can be assured that your seat meets or exceeds standards when using seat belts or the LATCH system to secure your car seat. No matter what seat you choose, it is strongly advised that you have your car seat checked by a Child Passenger Safety Technician (CPST). Each car seat tested is listed below in alphabetical order according to ranking, and you can click on any of the links for more information on each car seat.